I was hoping to add support for the "IBM Music Feature" card, but lacking access to one, there being NO emulation of it that I'm aware of, piss poor documentation (some of the worst I've ever read), and just plain general headaches even the simplest of operations are with it means that for now at least that's been shelved.

I am HOPING to very soon be adding support for the original Covox Sound Master which used a AY-3-8930 sound chip, but information on how it mapped said chip to the I/O ports is effectively nonexistent. I'm also playing with the idea of making something similar to the TANDY/Jr/CMS audio support for DAC devices like the Disney Sound Source or Covox Speech Thing for faster machines (there is NOT enough time at 4.77mhz to pull these types of stunts) but first I'll need to build one for testing and figure out where the 'cutoff' for a system being fast enough to support it during gameplay lies... much less maybe actually get such a device into my hands. I'll likely be tossing together a simple R2R ladder DAC "covox style" the coming week since it's not like I don't have the parts just lying around here. Those 0.001% tolerance 10k resistors I got out of a grab bag might just come in handy for that. 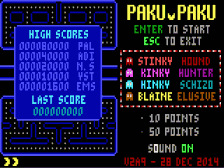 Since I have an all new sound and video codebase, the first thing to see the light of day using it is going to be Paku Paku 2.0. This is basically a complete rewrite from scratch now that I have some clue what I'm doing. It's kind of a laugh that I was programming blind on version 1.x given the result -- but now I'm using compiled sprites, custom data encoding, and a lot of lessons learned in making the C64 version to result in a far better build of the game. Right now it's around 60% complete, but the remaining bits should go fast since the original 1.0 release of Paku Paku took four days of development time. This may take a wee bit longer than that but I'm dotting every t and crossing every i... Wait, that's not right...

One of the biggest changes is the codebase is going to be WAY faster than the previous implementation. Sound, Video, control handling, game logic -- they all got a massive boost in speed and efficiency that I'm HOPING will be enough to make it run perfect on a non-expanded 128k PC Jr. The Junior's bottom 128k of memory is shared with the video controller, making it the slowest PC compatible ever released, to the tune of anywhere from half to two-thirds the speed of a real PC depending on the task. Squeezing that extra bit of juice out of the code didn't seem possible with my skill set two years ago, but today? I'm up for the challenge.

The solution was to use unpacked BCD, where each byte represents just one decimal digit. The 8088/8086 has some really good opcodes for handling it ASSUMING you can decipher the documentation; the laugh being almost NO books about x86 programming do anything more than mention it exists. While BCD addition to update the score is slow -- basically an ADC, AAA for each DIGIT! -- it's nowhere near as slow as turning a DWORD into a string -- 32 bit divide on each byte where you need to preserve the high word's result on each digit; which the 8088/8086 sucks at. This also let me use a more optimal way of calling compiled sprite versions of the decimal character draw routines.

No guarantees on when or if it will be completed as I'm mostly puttering around on it in my spare time; I'm HOPING to have a beta release sometime over the coming week or two, but that depends on how much it fights me and how I'm feeling. I've been sick on and off for a few MONTHS now -- laughably it's when I'm sick that I'm getting the most coding done.